Rails Girls comes to Monheim (right in the middle between Cologne and Düsseldorf)! During the fun and free web development workshop we'll dive into the magical world of Ruby on Rails.

You learn designing, prototyping and coding with the help from our coaches.

You need your own laptop, curiosity and a sprinkle of imagination!

Want to help? We are looking for volunteers and Rails coaches. Email us.

How to get there: See below.

Rails Girls Rheinland is co-organized with our awesome partners.

Want to help? We're looking for partners & sponsors for the non-profit event! Email us!

Railslove is a small team of passionate hackers, thinkers and designers creating juicy stuff for the web.

dpunkt is one of the leading German publishers in the IT-publishing market. dpunkt serves the professional computing and telecommunications community by providing information products and services, primarily through publications (print and digital) and training. Although dpunkt's focus is on digital technology, its mission goes beyond technology, promoting its use to support creativity, and to improve communication among people. dpunkt uses digital technology in an extensive way to design, manufacture and distribute its products. We at dpunkt strongly believe that technology and its efficient use on one side and creativity and playful joy (or plain fun) on the other, are not mutually exclusive.

Who is this aimed for? Women of any age with basic knowledge of working with a computer. We’ve had people of all ages taking part. Most of the speeches are given in english, but small group work is done in german. Please bring your laptop.

I know how to program - How can I help? We’re also looking for people to be coaches. We’ll have a two-three hour workshop before the event to walk you through the curriculum. Email us

How to get there?

Here are links to that location on Openstreetmap map and on Google Maps route finding service. 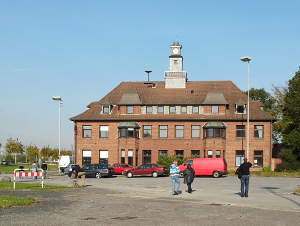 How to get there via public transportation on Friday

You'll be heading for the bus stop Deusser Haus in Monheim (Rheinl.). The innoQ-building is just a few steps from that bus stop. You can use the connection finder in its more or less English version or its German one, or else one of these:

Get off that train at Langenfeld, which you should reach at 17:25.

Enter bus 790 heading for Landwirtschaftszentrum, which should come at 17:31.

Get off the bus at Monheim Busbahnhof, which you should reach at 17:41.

Get off that train at Düsseldorf Hellerhof, which you should reach at 17:29.

On Saturday, we'll have a free shuttle service!

Get off that train at Langenfeld, which you should reach at 9:05.

When you are past Hellerhof, there will be a stop called Langenfeld Bergerhausen. Wrong stop, no shuttle service here, so remain seated.

Rather, get off that train at the next stop after Langenfeld Bergerhausen, which is plain Langenfeld, which you should reach at 8:54.

Proceed from the train station to the parking lot and bus stops. Some friendly person waving a Railsgirls logo will be eager you get you to the right place. - Should you experience a problem, that number again: +49 2173 3366 188.

After the event, there will be a shuttle service bringing you back to the Langenfeld S train station. But of course, we don't really want you to leave just then! You'd be missing a lot of the fun if you did!

The smart thing is, stay for the Afterparty! There will be yet another shuttle service then, too.